Not even a month has passed since the release of Money Heist season 4, famously known as La Casa De Papel, and fans all over the world are going frenzy, as they wait for a new season. Amongst all the chaos and impatient waiting, a particular fan theory related to Inspector Alicia Sierra is doing the rounds. And trust me on this, this fan theory will blow your mind.

What Is The Fan’s Theory?

Alicia is a character in Money Heist, who is an inspector. She made her first appearance in season 3 when we saw her torturing our charming hacker, Rio. The redhead pregnant inspector is considered to be cruel and manipulative. In the finale of season 4, we saw that Alicia pointed a gun at the Professor and confronted him, and then the season ended.

Now people are speculating that Alicia Sierra is actually Berlin’s wife, Tatiana. The character of Tatiana was introduced to us in season 3. She is the love interest of Berlin, and he trusts her blindly. So much so that he tells her all the details about the plan of robbing the Bank of Spain.

Too much to handle, right? Well, there are some coincidences that we cannot simply ignore.

Okay, so, the basic coincidence is their striking resemblance. Alicia is a red-headed beauty, and so is Tatiana. Well, of course, Tatiana seems younger than Alicia, but that is because she got married years before the robbery takes place.

Then in Episode 4 of Season 4, Raquel was being interrogated by Alicia. In that scene, we saw that Alicia told Raquel about her husband, who died two months ago because of cancer. Well, is it just a mere coincidence that even Berlin is no longer alive? Also, to add a little to the controversy, the last words of Alicia’s husband were “switch on the news” and guess who was also on the news when he died? [drumrolls] BERLIN!!! In the first two seasons, we saw that Professor always had the upper hand while negotiating with Raquel, but that was not the case with Alicia. Alicia would easily leave him speechless, and at times, she even had the upper hand in the conversation. This is because she has complete knowledge of the plan, thanks to Berlin.

What Happens If Alicia Is Actually Tatiana?

Some fans believe that Tatiana is back in order to take revenge from the Professor as he let Berlin die. Well, we know that Professor could not have helped Berlin, even when he wanted to, after all, Berlin was determined to keep the police officers busy so that his teammates could escape. 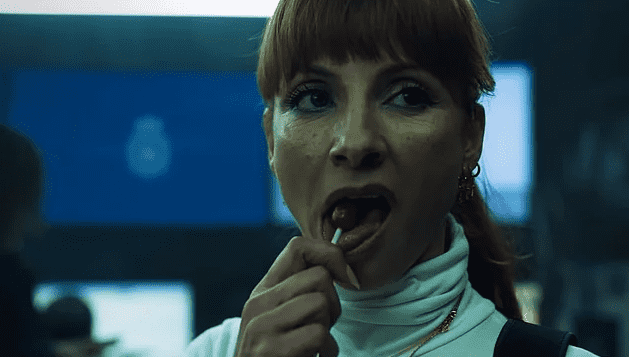 There are other fans who believe that Alicia is actually with the Professor, and she is involved with the case is a part of his plan.

As far as show creators are concerned, this seems little as ‘Already scripted’ and more as ‘let’s include a fan theory’.

As per the Money Heist Phenomenon episode, writers of the show haven’t already written a big script of all episodes and seasons. It goes with the flow. So, there’s less possibility that this is already scripted and possible. However, if there are no loose ends to tie, this theory may get picked up for future season. No one really knows the truth, as Money heist is one of the most unexpected and surprising stories ever. Biggest surprises come when you expect least.

It’s a long wait before we know the actual identity of Alicia and our questions get answered in next season.